Sikkim and Darjeeling has played an integral part in the advancement of Nepali cinema. In their times, Tulsi Ghimire and Shambhu Pradhan were the most popular of directors, who helped popularize the Darjeelinge Nepali dialect among the youths to the West of the border. We saw Acharya and Katha this decade in particular, directed by Prashant Rasaili who also hailed from the region. With his recent venture Appa releasing this Friday, another film maker Anmol Gurung adds his name in the list of members contributing to Nepali cinema from that diaspora.

Debut director Anmol Gurung’s Appa is tribute to all fathers who are ignored by their children. It’s an attempt to remind the children about the sacrifice and contribution fathers make in order to make their children’s lives better. In the movie, an ignorant tour jeep driver Birkhe (Dayahang Rai) gives shelter to Siddarth, a Bengali boy who loses his parents in an accident. Birkhe, a careless drunkard as he is, can’t take care of the boy for long and hence is advised to send him to the boarding school. Moreover, he isn’t allowed to meet him till Siddarth finishes his high school. Fast forward to the boy’s adulthood and he is a popular student in his school and is in love with a girl. What happens when Birkhe finally gets the opportunity to meet the boy makes up the rest of the story.

Siddarth and Kabya’s affair and high school romance takes up the most of the second half which almost make the viewers feel as if they are watching two different movies until the final act weaves them together in a mildly convincing manner. However, the director and the young actors must be commended for their effort for showcasing such a sweet and realistic albeit short-lived affair. All the actors have given very convincing performances, especially Siddartha Raj Tamang and AllonaKaboLepcha are definitely going to win the viewers’ heart. Beautiful sceneries of Sandakpur captured using drone shots, change in lighting in accordance with the mood of scenes and some interesting camera angles makes cinematography one of the highlights of this movie. All the songs are situational and fits to the movie’s tone and background score. However, there are too many of them for a 99 minutes’ movie.

Let’s talk about the other side of the story. First of all, why on earth a trailer of this movie needed to be so revealing is beyond me. The movie itself could have been lengthened to good two hours as there are some important links that seem to be missing. The titular character is absent from the boy’s life for so many years, how come we as viewers can sympathize with Appa when the boy refuses to acknowledge him? Appa had made the biggest mistake anyone could make, which was involuntary manslaughter. Yet, not much is shown as to whether he had regretted that or done anything for atonement. Perhaps some additional scenes were required to fill these gaps to convince the audience that he was worthy to be called as the boy’s father.

What Appa lacks the most as a love story and drama is its scope. It doesn’t want to explore human hearts and excavate to the core to explore the human nature. Perhaps the makers only wanted this to be a light hearted crowd pleaser. As a result, the movie has turned out to be an eye pleasing effort with no depth in story. Watch this movie for the other love story within, good cinematography work and performances of the young actors. 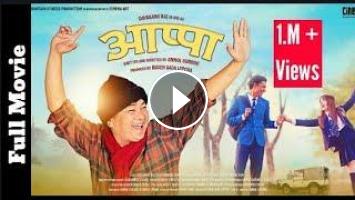