Predators of African Wild Dogs - National Geographic Documentary
The African wild dog (Lycaon pictus), also called the painted wolf or Cape hunting dog, is a canine native to sub-Saharan Africa. It is the largest indigenous canine in Africa, and the only extant member of the genus Lycaon, which is distinguished from Canis by dentition highly specialised for a hypercarnivorous diet, and a lack of dewclaws. It is estimated that about 6,600 adults including 1,400 mature individuals live in 39 subpopulations that are all threatened by habitat fragmentation, human persecution and outbreaks of diseases. As the largest subpopulation probably consists of less than 250 individuals, the African wild dog is listed as endangered on the IUCN Red List since 1990.
#wilddogs #natgeowild #juantaura 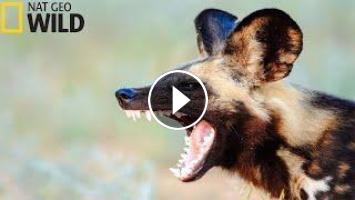